The Year of the Rooster begins January 28, 2017. Get your Chinese New Year on at the Palm Beach Zoo’s annual DragonFest this Friday from 11:00A-2:15P. Enjoy crafts, face painting, a DJ and the Dragon and Lion Dances by John Wai Kung Fu Academy along with a marial arts demonstration.

Are you a Rooster? 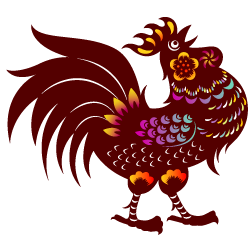 Excited that this is your year? Not so fast. According to Chinese astrology, your Zodiac year is considered to be unlucky. People in their zodiac year are believed to offend Tai Sui, the God of Age, and incur his curse. It is believed to bring nothing but bad luck.

How can you fend off the bad luck? Try wearing red or donning jade accessories.